The Design Cast Limited is a great example of how a Kiwi company can carve out a lucrative niche on the world stage.  Headed up by Colin and Jane Howard, this crew specialises in a very specific product with a very small market that is scattered from Bordeaux to Bucharest, Boston and beyond. 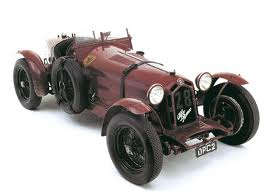 The Design Cast manufactures parts for what is one of the world’s costliest cars – the 1930’s Alfa Romeo 8C Monza.  These cars regularly change hands amongst well healed enthusiasts and Mille Miglia road racers for US$1 million and more – and even a reproduction example without a genuine original engine or chassis may fetch US$500,000.  Serious money.

Sure, anyone who has invested that sort of money in a car will pay whatever it takes to get the parts they need to keep their car in original and race-ready condition.  And due to their value, plenty of people around the world are motivated to build faithful reproductions from the ground up – for which they need parts.

But it’s not quite as simple as buying some engineering gear and opening up shop selling Monza spares – here are some of the challenges:

The specifications, patterns and measurements are not easily available – and are jealously guarded.  It’s almost impossible to produce for example a ball joint or a bonnet catch which will bolt onto the car if you don’t have the exact specifications for the part.

To say these buyers are fussy would be an understatement.  When they fit a part to their car, not only does it need to be exact – but it needs to look as though it has been on that car for the past 80 years.  No-one wants a shiny new unblemished part that would compromise the patina on their race-weary pre-war Alfa – even if its just a small suspension component that will only ever be seen from the mechanic’s pit.

The cost of producing a one-off part is high.  It is impractical to carry a full inventory of parts as some items may only sell a handful of times in a decade.

While spread around the world, the circle of Monza owners is a small clique.  Reputation within that group is everything – and without it, supplying is difficult.  They will buy the parts they need from Argentina, New Zealand or wherever – and Monza owners know and understand that the parts they require will never be cheap.  But these owners do need to know the credentials of the people they’re dealing with as the pedigree of their investment could be compromised by installing 2nd rate components.

The Design Cast have worked hard at mitigating these challenges.  Colin has networked extensively in person and on-line getting to know vintage Alfa owners around the world – and building up a catalogue of parts.  He has painstakingly photographed, measured and electronically recorded the specs for every genuine 8C component he has encountered – and now The Design Cast has a database of accurate files and drawings on just about every component of the 1930’s 8C Alfa Romeo.

And The Design Cast has perfected the process of manufacturing low volume components in a cost effective manner using the latest techniques in rapid prototyping and direct digital manufacturing on demand.  Often this can be achieved direct from a file on a USB stick  to a finished component.  The specs for each part even replicate the appearance of age, wear and exposure to the ravages of the racetrack.

Based on Auckland’s North Shore, this is an interesting Kiwi business that has found an export niche – and is quietly setting about fulfilling the exacting needs of this small but lucrative market.